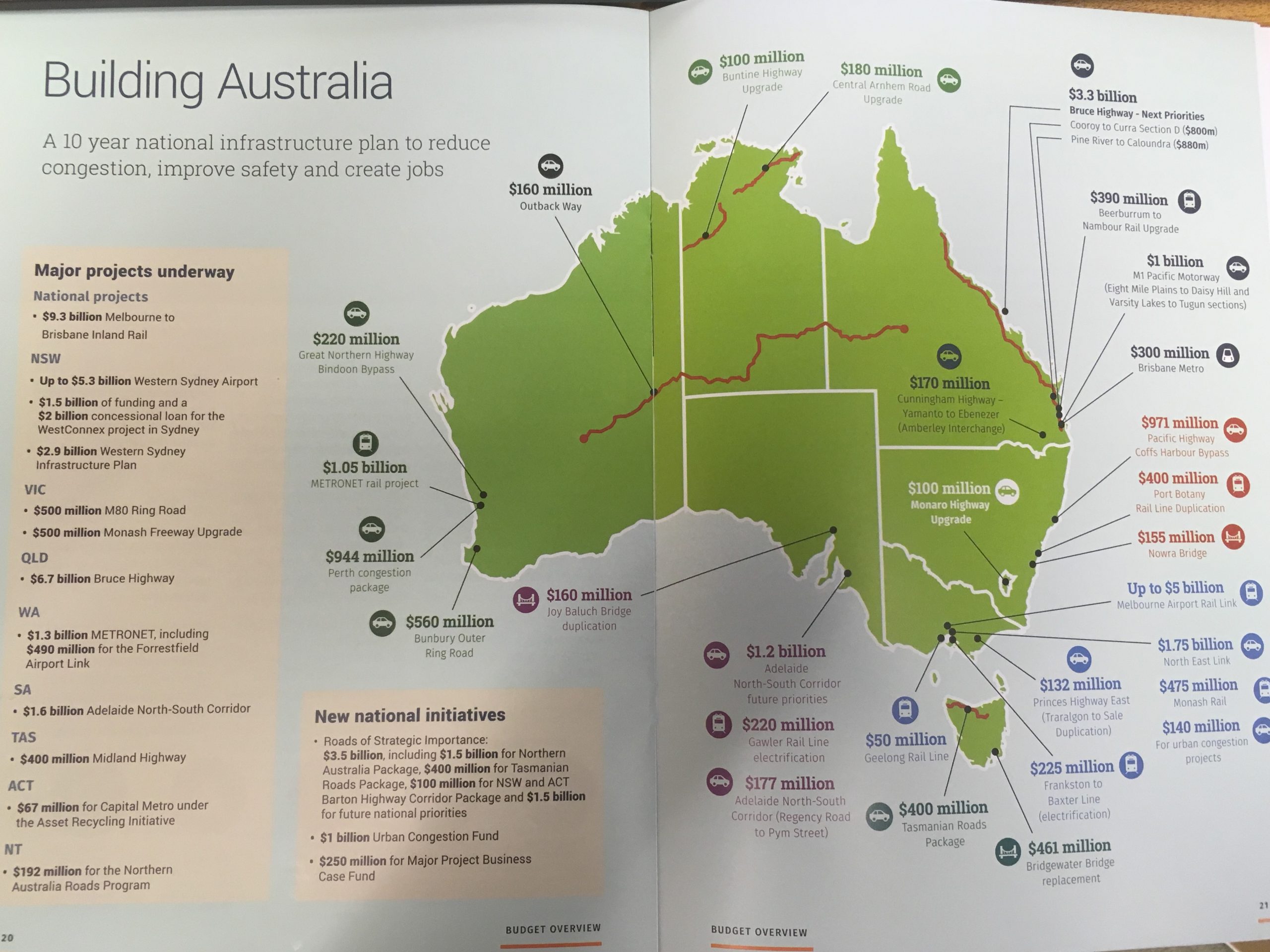 2018/19 Budget: ‘Living within our means’? Means leaving NQ out, obviously

2018/19 Budget: ‘Living within our means’? Means leaving NQ out, obviously

KAP Leader and Federal Member for Kennedy, Bob Katter has commented on the 2018-19 budget which is full of more ‘looking into’ projects.

KAP Leader and Federal Member for Kennedy, Bob Katter has commented on the 2018-19 budget which is full of more ‘looking into’ projects.

“A promise to do something and the benefit will accrue in 2024 is a fantasy land.  And I think that the ALP and LNP have these fantasies which clearly Australians should not, and won’t, believe.”

“This will benefit of the low income earners – there are a lot of people in that category and this tax offset is a good thing.”

“One of the biggest issues in Australia is more money for retirees and other pensions.  We would have like some more, but this is a good start. We pioneered the stay at home care – the HACC program – for Australia grew out of Richmond and Hughenden.  And clearly this a continuation of this initiative.  The people associated with the Anglican and Catholic churches in those two towns deserve all the credit.”

“I would estimate that almost 70% of the Australian corporations are actually foreign owned.  And in the main they have it rigged so they transfer pricing and such devices, very few pay much tax at all.  In any event the vast bulk of the benefit will go to foreign corporations.”

“I just think the situation for young families is impossible.  No one in this country will have kids if they find out the real cost.  And the fact that DINKS (Double Income No Kids) which is myself and my wife.  We apply the same tax rates to me and my wife, as our children who all have three kids.  This country has to have a more fair tax system and income splitting. So a one or two household income is split five ways if that income is carrying a wife and three kids.”

“I mean $1.5B over three states over 10 years is quite frankly a puzzling nothing, but still we would remain very hopeful it will complete the Charters Towers – Ravenshoe to a full two-lane road  and importantly will complete the Hann Highway.  We will try desperately to try and get some of that Federal Government money allocated to the appalling failure of successive five State Governments to seal the road to Chillagoe.”

“We want everyone in our electorate to realise this money is there and to go after it professionally and aggressively.  I would plead with people that they get the backing of the Council, State MP and Federal MP – whoever they are.”

“Of the $28B being parceled out over 10 years, it looks like we will be getting enough money for six or seven roundabouts.”

“We will desperately try again to get an allocation for a bounty on crown of thorns star fish.  We probably want this for tourism as much as for anything else.  Man has descended from three million years of hunting and we can have the hunting and also provide a very small, but a contribution to significantly reducing the damage being done.”

“The usual free trade deals have resulted in needing counsellors for farm suicide.  It is like living in a lunatic asylum having a PM espousing the TPP, when free market policies has been so absolutely disastrous for farm agriculture.  Three quarters of our sheep herd has vanished, and our biggest export item wool is not even in the top 25 exports.  Congratulations free marketeers.  The dairy industry has still not recovered to its pre-deregulation price levels.  The American Free trade deal was worth an ice cream a week to the dairy farmer.”

“It is very slimy in Qld that the State Government still owns all the facilities that the much maligned trade union movement did a wonderful job on stopping the sale of the electricity industry.  But the state ALP has used it as a milking cow.  I can tell you, remember I was the Minister; they are getting over $2,000M a year. The better off people have solar panels on their roof and are paying almost nothing on their electricity.  It is the low and middle income earners that are paying $1,500M in what is effectively a tax to the State Government and a small subsidy to the rich for putting solar panels on their roofs.  The rich pay nothing and the poor pay triple.”

“Piss-ant nothing. That’s good, but many of us would argue this is closing the gate after the horse has bolted; Panama disease, Blue Tongue, White Spot, Citrus Canker…”

“They deserve every ounce of credit for stopping the boat people; they cost us thousands of thousands of millions.  We are a running sore before the Liberals got in.”

“It does not come to grips with the towns that are losing families.  The government has shifted eighth grade down to sixth grade.  The cruelty of asking people to send their kids at aged 11 to boarding school or have to move out of the small towns, is the most graphic evidence of the innate cruelty and inhumanity of the Qld Government.  Much more so when they ignore rural suicide. “

“Many of my friends have five kids, provide tertiary education.  My brother had four children, but they live in Brisbane my friends with four children in country towns would be $350,000 worse off by comparison.  Because their parents had to pay board and accommodation.”

“It does not go anywhere near of addressing the collapsing free hospital system, graphically illustrated by the Mareeba situation where 24,000 people have no access to bulk billing and arguably no outpatients after the two year funding we have secured runs out.”

“We are advised of the difficulties faced by cancer patients to afford the drugs for life saving cancer treatment. Many simply cannot afford to buy drugs due to the high cost. Some drugs are subsidised in many countries around the world but are not offered here on the PBS scheme and for many they are life changing, giving patients more time and quality of life. There are many pressures on the families living with cancer as cancer treatments are not available in most small inland town’s means travelling to the city hospitals. Therefore being away from their family support systems, their jobs, their farms, their lives for long periods of time is inevitable. On top of these demands we have to cope with exorbitant extra costs of these important drugs. It is imperative that the Government addresses the current system of supporting those with life threatening illnesses, which affects so many families in the community.”

“In conferences with Dr Rod Catton, and in past years Digby Hoyal, Grant Manypenny, Kevin Zischhe, the increase in wages to doctors in the Qld Health system, has completely unbalanced the system because bulk billing has not had a commensurate increase.  Private Practice GPs particularly in country areas are bleeding off to the public system where the Gulf between what a private practice can pay and what Qld health is paying.”

“Again when the Government fell in 1990 we have four dentists residing in and serving the mid-west and Gulf towns, now often we have none and at best we have two.  Often, only one being resident.

“Sure would be nice if they returned arbitration and a true free floating dollar to our farmers and we wouldn’t need the money for suicide prevention.

“We understand that many people live with type 1 diabetes throughout their adult lives. We also understand that many recognise CGM technology as the most superior technology available. With secondary alarm capacity, CGM is lifesaving and to deny those outside of the current age bracket an opportunity to access funding for this treatment is unfair.
The response from patients currently undergoing CGM seems very positive and we would consider this to be a huge success on the part of the Minister. This funding success story is a clear indication of the future for adult T1D patients if they had access to the funding as well. This additional funding is important to increasing the quality of life for all Australians, not just those under 21.”

“As an ex aboriginal housing minister, we built 2000 houses. I’m just appalled that there will be 400 jobs gone in Cairns and the situation will go from the 15 person occupancy rate, with all the resulting domestic violence, poor school attendance and crime, that goes with this overcrowding for the people of the Cape.  While I try not to make a personal comment, I drive in from the north of Cairns and there is absolutely nothing.  For the Member for Leichhardt not to have raised a single bo-pee when he represents three quarters of Cairns and all of the peninsula and Torres Straits communities.  Not even the most elementary representations have been made and we badly needed him in this fight, as we were always going to lose it unless both of us were involved.  I am deeply disappointed and very angry. The people of the far north have been badly let down by the Member for Leichhardt.

Banking and Finance (carry over from2017-18 budget)

“We have already got the ombudsmans in plague proportions.  To use an expression from my old cattle industry days ‘they are as useful as mammary glands on a bull’.  So we are going to be putting out a lot more money to have a lot more of them. “

“The $6.2B Levy is good, instead of cutting welfare they are going to hit the bank’s obscene profits. With the levy, they have to find money from somewhere – that is how the liberals look at the world, with their obsession with balanced budgets.”