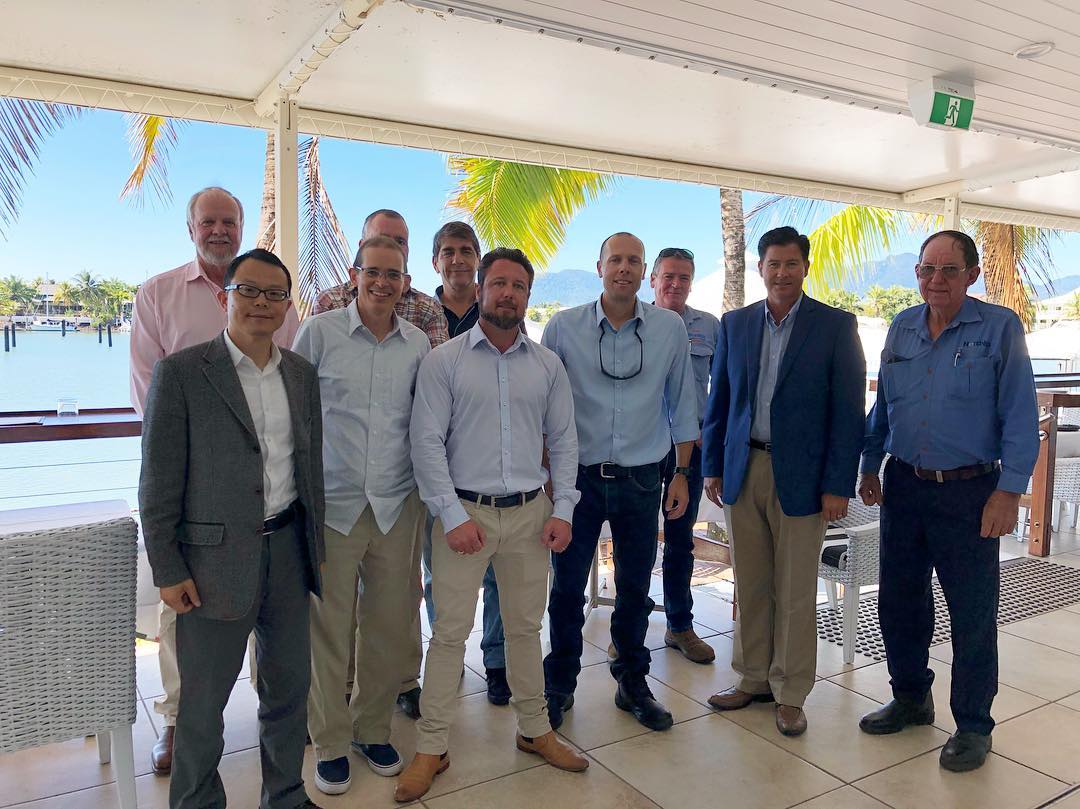 THE dream of rebuilding Cardwell is a step closer to reality following a ground-breaking meeting with stakeholders organised by Hinchinbrook MP Nick Dametto yesterday.

The Katter’s Australian Party MP was instrumental in bringing together representatives from Port Hinchinbrook mortgagee Sino-Resource Import and Export Co Ltd, Cassowary Coast Regional Council and maintenance firm Norship Marine to Cardwell for a discussion on how to restore town’s ailing development to its former glory.

“I felt the meeting was productive and helped get everyone on the same page when it comes Port Hinchinbrook,” Mr Dametto said.
“Now that Sino has been appointed as the legitimate mortgagee of Port Hinchinbrook, I saw an opportunity in bringing together stakeholders in order to determine how to proceed on this issue.
“By joining forces and building trust, we have the best chance of convincing the State Government to do its part and dredge One Mile Creek.”

A key topic discussed at the meeting was the possibility of reworking Port Hinchinbrook’s conformed deed which was signed by the State, Commonwealth, local council and original Port Hinchinbrook developer Williams Corporation in 1994. Under the terms of the deed, the developer assumed responsibility for the maintenance of the grand canal access channel, marina basin, roads and sewage treatment plant.

Other topics discussed included conducting an independent assessment of Port Hinchinbrook’s sewage treatment plant and determining who takes responsibility for its future maintenance, identifying additional key stakeholders for future meetings, upkeep of roads and essential services within the development and potentially submitting an application to dredge and rebuild Port Hinchinbrook’s marina as well as the area in front of Norship’s facilities.

Future maintenance dredging programs were also considered.
Sino Group investor Charles Seavey said he felt optimistic about the future of Port Hinchinbrook following the meeting.
“It’s been an extremely positive meeting and I think we’ve made substantial progress,” he said.

Mr Dametto said his sole focus was on getting an outcome for residents of Port Hinchinbrook, who have been frustrated by the development’s long running saga that has involved multiple court battles.

In May, the Cairns Supreme Court determined that Sino was the legitimate mortgagee of Port Hinchinbrook in what provided some much-needed clarity for local residents after years of being left in limbo.

“I know that decision had been a long time coming and many residents were eagerly awaiting the outcome. We all want a solution to the many issues that have plagued the development for too long,” Mr Dametto said.

“The purpose of yesterday’s meeting was to provide that clarity and certainty for the future of Cardwell. There is much at stake and I am determined to get the State Government to act on dredging.”

In March, Mr Dametto tabled a paper petition in parliament with 1355 signatures to the State Government calling for One Mile Creek to be dredged to allow all-tidal access for Cardwell Coast Guard.

He followed this up with an adjournment speech highlighting how important it was for the State Government to maintain the state-owned water ways within the Port Hinchinbrook development.

“All-tidal access should be a fundamental right for any recreational or commercial boat operator living in a coastal community,” Mr Dametto said.

“We also have a safety issue with the Cardwell Coast Guard vessel unable to respond to vessels in distress at low tide. It’s only a matter of time before lives are lost at sea.”

Mr Dametto said Cardwell could soon regain its status as a tourism hotspot if the State followed through with a firm commitment to dredge.

“Economic stability, a picturesque location and an enviable tropical lifestyle are the key ingredients to attracting investment to North Queensland. With their channel dredged, I believe Cardwell would be well on its way to doing this,” he said.