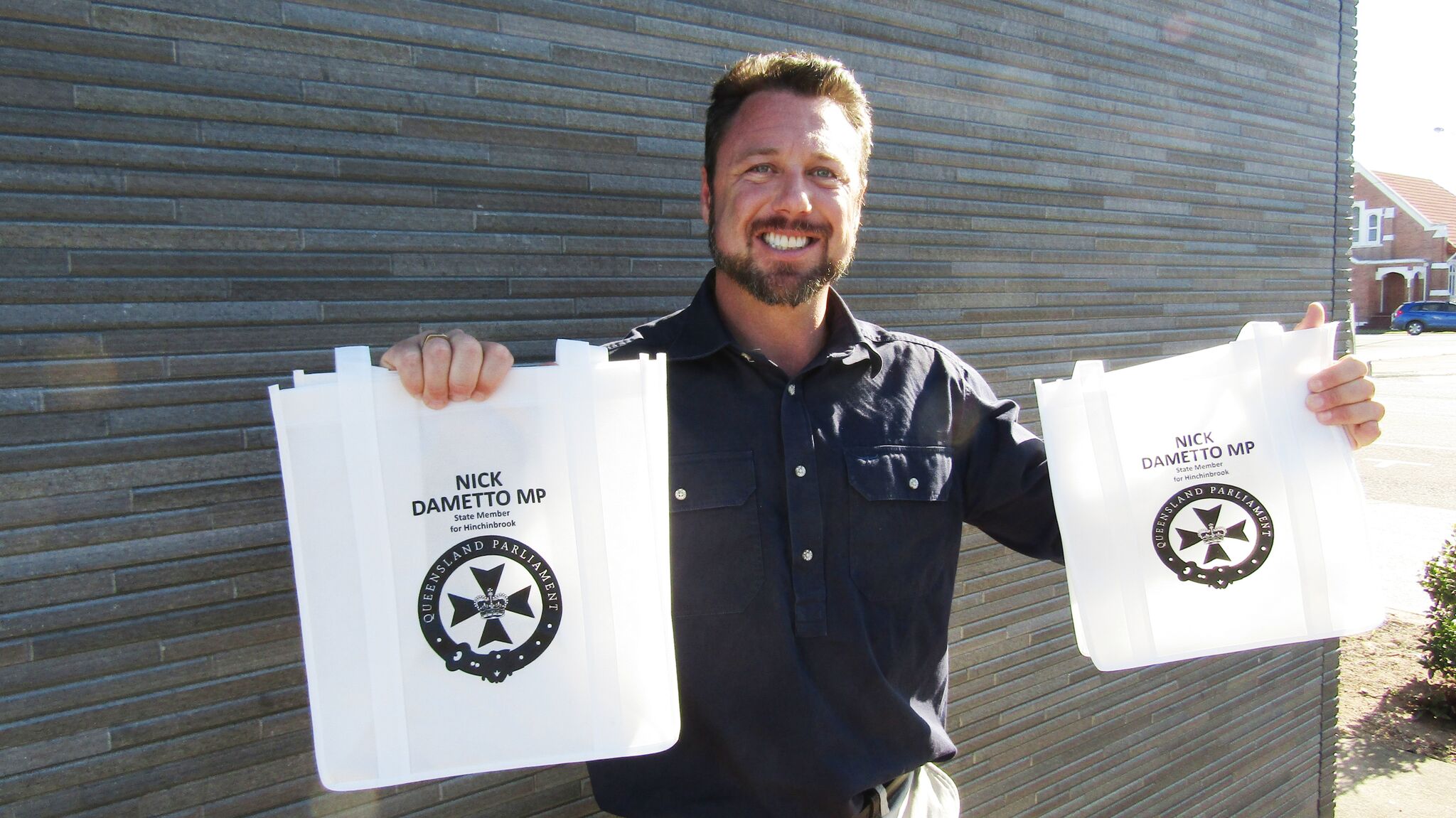 Fresh after a busy stint in parliament, the Katter’s Australian Party (KAP) MP hit the pavement at shopping centres this week to mingle with constituents and hand out free reusable bags.

“I always look forward to getting back to my electorate and listening to people about the issues that matter to them,” he said.

“This past week served as a great opportunity to not only do that but help promote a more sustainable future by handing out free reusable bags, which are a practical and effective way to help our environment and marine life.”

The switch to reusable bags follows the KAP’s plan to introduce an amendment to State legislation that will phase out plastic straws with paper straws as the replacement. “As a former tourism operator who worked out on water, I saw a large increase in the amount of plastic out there in the ocean and washing up on our beaches,” Mr Dametto said.

“If you’ve ever seen a plastic bag or straw in the water it looks just like food to a turtle and we will support anything that reduces the number of straws in the ocean. “We are seeing more operators across North Queensland making the switch to paper straws and we applaud them for that.”

Earlier this year, Rockhampton Regional Council created a council by-law applying penalties of up to $2500 for people who deliberately release helium balloons outdoors. The by-law is consistent with State Government legislation which considers releasing helium balloons to be littering under the Waste Reduction and Recycling Act 2011 – whether released deliberately or by accident.

“We are supporting councils who ask people to do the right thing and not release these balloons into the air where they end up in our oceans,” Mr Dametto said. “The KAP are not party poopers so we are not calling for helium balloons to be banned, but rather, asking people to hold on to them, limit the release and pop them before you dispose of them in the bin.”

The ban does not apply to barrier bags without handles (typically used for fruit and vegetables), product packaging bags, kitchen tidy/bin liner bags, nappy bags or heavier-weight plastic bags such as those used in department stores.

Retailers caught using single-use bags after July 1 could be fined up to $6300 per offence.

Customers are free to bring either their own reusable bag or plastic bags when shopping.

“This will be a simple change in routine for people. All they’ve got to do is remember to bring their reusable bags before they head out to the shops,” Mr Dametto said.

“Wouldn’t it be nice to leave a world to our children where the only thing we collect along our beaches is shells? I see this move to reusable bags as a positive step in the right direction.

“We can all do our part to ease the strain on our environment and build a more sustainable future.”