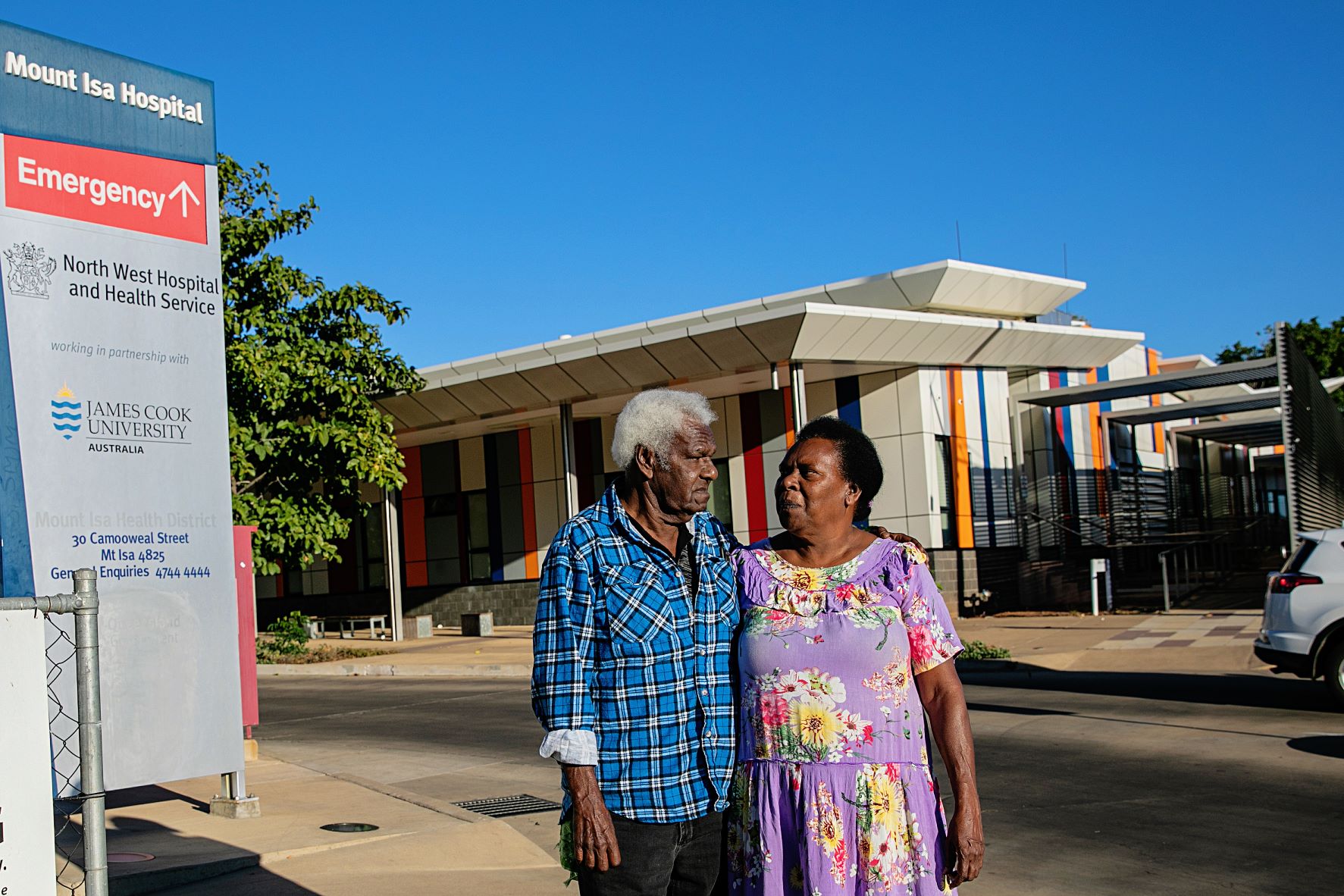 I was born and raised on Thursday Island. I think I must have been only a young baby on the outer island of Mabuiag in the Torres Strait. I remember doing prep school on that island. And then after that from year 1 to year 9 was on Thursday Island.

It was fun. I used to go to school with no shoes on, we never had shoes back then, our parents couldn’t afford shoes and uniforms. So sometimes I’d attend school with a dress an extra size bigger than myself. But it was all fun to be around other children. And the teachers – I loved the teachers. I’ve always dreamt of becoming a teacher, but never made it to grade 12.

I did grade 8 and grade 9. Then my biological grandmother took me over to northern peninsula area. Which is Bamaga, just at the tip of Australia. I did half way through to grade 10 at Bamaga State High School. I myself have been through traumatic experience, being a victim myself. And never succeeded to complete year 12.

I would love to say that I had a happy childhood, you know upbringing was happy until you reach a certain age and then everything turns upside down and your whole world is collapsing around you or you’re collapsing with it.

My first job was with a local – I don’t know if they’re called green grocers – or anyway it was working for $30 a week, which was fantastic. I felt good about myself serving people. It was like a shop. It was on Thursday Island itself.

At the same time I had my daughter, Dad (my husband Min) came down to work for Queensland railways. And a year later, the daughter and I followed. There was nothing to look forward to up in Cape York. So we travelled down to Cairns, stayed in Cairns for a couple of months and ended up in Mount Isa in June 1981.

I didn’t quite do it on my own. We had one aunty here in Mount Isa already.

I got homesick. For the first three years I was homesick. I kept ringing my mother, my biological mother. Because I was adopted out. And mum passed when I was 9 or 10 years old, my adopted mother. But my biological mother already raised other children of her own, so I gathered that I would only be a gap filler for someone else. So I made that move to come down to Mount Isa. But the first three years I was very homesick.

After that, Min was on Queensland Railways for 9 years. Then we had a house. One lovely lady, an aboriginal woman here in Mount Isa, put in a strong word for us with our application. We got our first housing commission that we were to set up as a family and live in as a family, which we did. And we’re so grateful to her. Still love her to this very day. We spent 24 years in that house.

Min lasted on the Queensland Railways 9 years, then he did training for tyre fitting. The company was Anderson’s Tyers. And then he went into that profession of service and tyre fitter. Started small and worked his way up until he did Bridgestone Earthmovers for 20 plus years.

Meanwhile, 1985, I was picked up by one of the Franciscan Missionaries of Mary nuns. I was with my 3 daughters walking to the hospital. It was so hot. She offered us a lift. And I got involved with the Catholic church since then.

Just voluntary work. It was once a week. Not every day. Gradually moved into twice a week, then three times a week. And I’m still here. I think I’m part of the furniture now.

The homesickness eventually passed. It passed so much to the point that if we have the chance and save the money to travel to the Torres Strait, we only last there a week. We can’t wait to get back here. So Mount Isa is home. I miss the fishing, but we’ve got yellow bellies from Georgina River!

I like the community. The ethnic background of the people that makes up this great community. I started working for the church in 1986. Did voluntary, then we were commissioned as church elders, then I took on pastoral care for the church since then. I was trained into doing funerals, baptisms, anointing of the sick. House blessings. Prayers. And through my work journeying with family that are grieving, helping them do preparations for the church service. Do the actual service itself.

This community sort of warmed or accepted me as part of a family other than your immediate family. So we’ve got people from Doomadgee, Mornington Island, Normanton, Boulia, Cloncurry, everywhere. That appreciate the type of work that we are doing for them and their families. And the indigenous families of Mount Isa have accepted me and my family as one of them. One of their own. So it’s a feeling of belonging.

We ended up with five of our own children. Youngest daughter we raised from our sister, she’s now left home. We’ve put them through education. They got a job. We’ve got five now living, we lost our youngest son. He was carer for Min. That’s how come Min ended up back in Mount Isa, because he had to bring the youngest one back.

Mount Isa is really home. It’s where we’ve really, really secured our roots. This is home.

We have six grandchildren. They’re all in Cairns. Oldest daughter with her three daughters. She lives in Atherton. Second daughter with her husband and two children, they’re in Forest Gardens. They both work. Third daughter’s a chef at the Navy canteen, HMAS Cairns. She’s got one son. And our son lives here in Mount Isa in his own place with his girlfriend. We are very proud. The youngest daughter is working for a chain of hotels for Pulman in Cairns.

Min has spent a lot of time getting health care. He needs dialysis, but there aren’t enough chairs in Mount Isa.
I would love to see the renal unit in Mount Isa bigger. I’m now in the stage of already families are coming and saying to me we would love to have our loved ones back here. (Getting treatment in Mount Isa).

Min is here since we brought our youngest son’s urn back, his ashes back, but we’ve been playing it by ear every week. The renal staff will say there’s no seat for you here Min, so we’ll have to try and make arrangements for him to get back to Cairns. But we’re so fortunate and lucky that he’s here at the moment. We are playing it by ear every week. We are hoping to have confirmation soon that he will stay (and get allocated a permanent chair in Mount Is).

I know that he does have other chronic illnesses but living out of his suitcase (when he has to travel for treatment)…It’s hard. And not only that, Dad’s (Min) illiterate as well. He can only speak basic common English, not the in depth.
Min has spent a lot of time in Cairns getting treatment there. We want more chairs in Mount Isa. Not only that – Min’s not the only one who has been away from home. There are other patients that are out there away from their families as well.