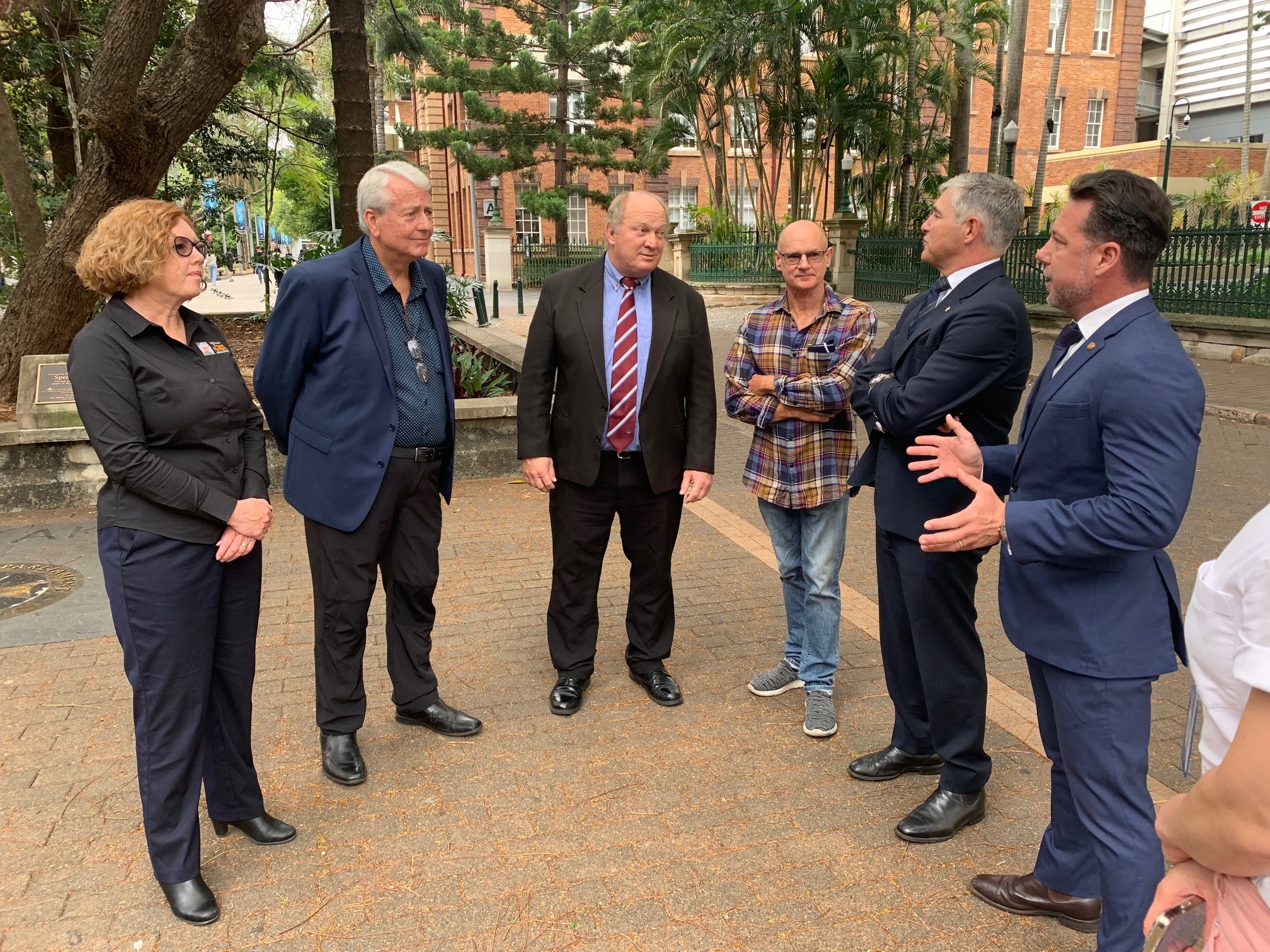 Katter’s Australian Party (KAP) MPs and seafood industry representatives rallied outside Queensland Parliament this morning in a last-ditch appeal to the Palaszczuk Government to overturn its rejection of the no-brainer, pro-Aussie seafood labelling bill, ahead of its debate tonight.

The KAP’s Food (Labelling of Seafood) Amendment Bill 2021, which would bring dining outlets selling seafood in line with the retail sector and enforce country of origin labelling, was expected to be voted down tonight “beyond any logic”.

KAP Leader and Member for Traeger Robbie Katter said the Government had two choices today: to continue allowing the deceit of selling inferior product for a higher price, or enforcing truth and pride in putting clean, green product on customers’ plates.

“At the moment, you can be buying fish that’s labelled barramundi in the shop and it can be Asian sea bass from the Mekong Delta which is one of the most polluted rivers in the world,” he said.

“There’s a high level of deceit where people can offer the same inferior quality imported product for a higher price.”

Mr Katter wrote to all 52 Queensland Labor MPs last week asking them to reconsider their rejection of the Bill and do the right thing by Queenslanders, and put their opposition down to professional jealousy.

“It’s not their Bill so they’re not going to pass it; it defies logic and it rips away from the pride we have as Queenslanders,” he said.

“I’m a proud Queenslander and Queenslanders should be proud about the product that’s produced right here in Queensland, whether it’s farm fresh or whether it’s coming from wild-caught – seafood across Queensland is some of the best you’ll find across the world,” he said.

“Everyone seems to have a social conscience these days, that’s why consumers are buying free-range eggs or organically-grown food; we should know where our seafood is coming from because the reality is, in Australia, we have the best growing and environmental standards in the world when it comes to

producing farmed seafood – overseas, not so much.”

Mr Dametto said if people saw some of the of the footage and imagery of how seafood was produced overseas, most would make the decision to buy Australian-grown.

Hill MP Shane Knuth urged the Government to apply the same support to seafood consumers that it displayed to shoppers regarding the trading hour laws.

“Two weeks ago, the Government introduced extended trading hour laws all about supporting the consumer, well this is the golden opportunity because this is about the (seafood) consumer, giving them the choice and knowing where their seafood comes from … and yet the Government is dodging and hiding and

then throwing that out,” he said.

“It’s really a matter where we’d like to see the Members of Parliament put their politics aside and give something to the consumers and the members of the public that’s a simple right; it’s not difficult, it’s not rocket science,” Ian Hamilton Snr said.

“It could be a tourist, it could be a local that walks into a seafood restaurant, they’re there expecting local seafood produced from pristine Australian waters or aquaculture, so it’s their right to know what they’re actually buying,” he said.

Executive Officer of Australian Prawn Farmers Association Kim Hooper said displaying a little ‘i’ to indicate imported produce would not only help consumers make informed choices but promote growth in the industry.

“We have such quality, reputable Queensland seafood … it also would help growth of both aquaculture and seafood in relation to being able to differentiate the fact that it is home-grown or caught,” she said.