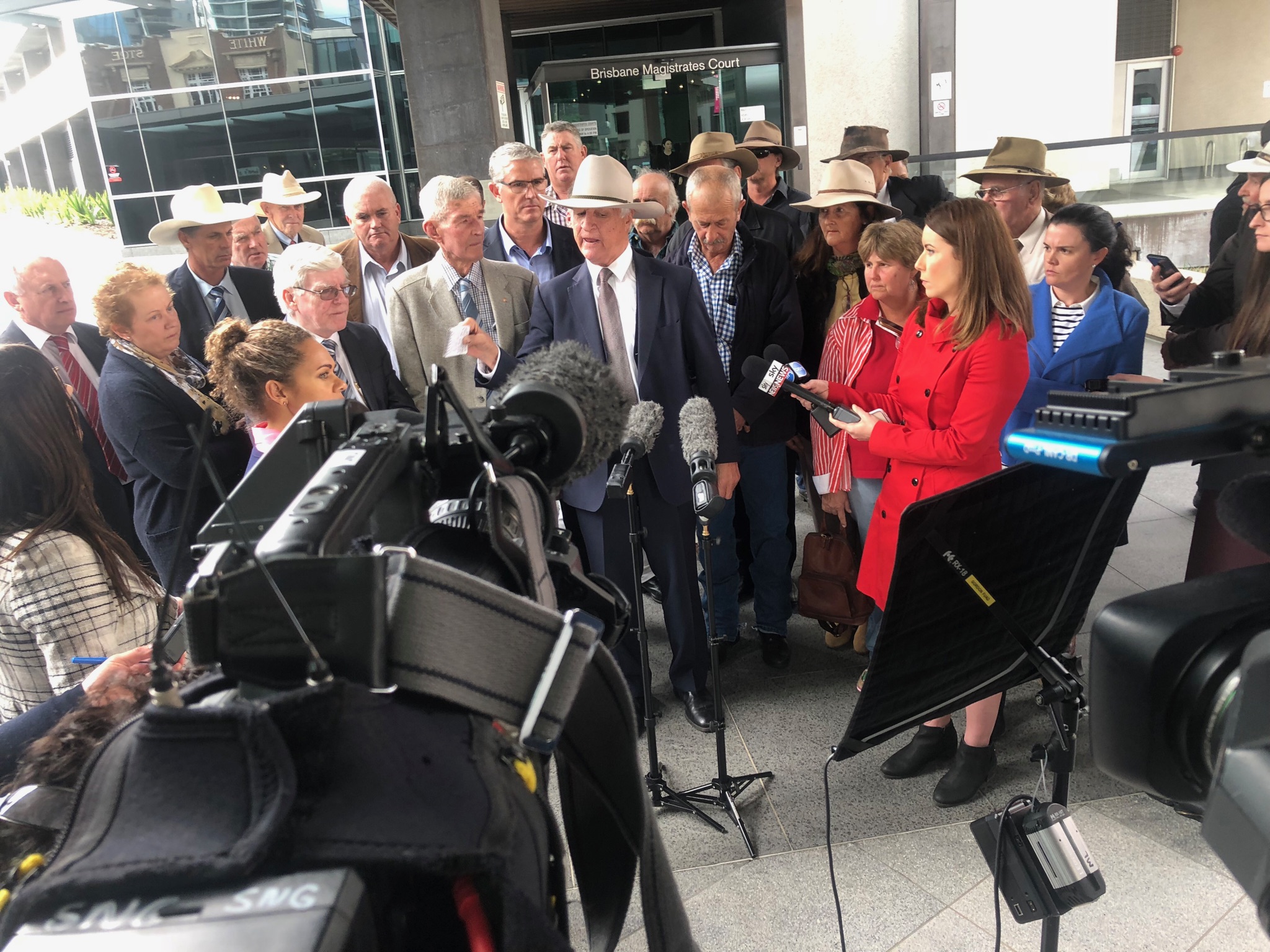 KAP Leader and Federal Member for Kennedy Bob Katter fronted the media outside the Brisbane Magistrates Court alongside a fellowship of enraged farmers from rural Australia who travelled to the State’s capital for the Royal Commission farm finance hearings into unethical banking practices.

A delegation of more than 20 people, including farmers Charlie Phillott and Debbie Viney as well as KAP Candidate for Leichhardt Daniel McCarthy, stood beside Mr Katter as he noted his concern that the watered down terms of reference meant the Commission most likely won’t achieve a solid outcome.

Mr Katter said “Most of the mob around me today has been fighting for this for five or six years. And the fact that the banks were able to set up the Royal Commission, and not we the people, it is frustrating for us. We are seeing all the pain and horror filtered through the forensic process.

“The hide of this business, we are averaging one suicide every two weeks – and no one cared about us, no one did anything about it – and it continues today with one farmer doing away with himself every five or six days in Australia.

“Of the cases this morning that were heard, one was in central Victoria and the other was in Far North Queensland. But why has this happened? Because the reconstruction banks – the government owned banks were removed. They took away the policemen and so the buccaneers and bad guys – as quoted by the famous historian Hilaire Belloc – ‘we are now at the mercy of the untrammeled rapaciousness of the mercantile classes’ – have been released and we are still the victims of it today.”

With the support of the crossbench and opposition, Mr Katter introduced the People’s Commission Enquiry Bill with all the powers of a Royal Commission into the Parliament in March 2017. It featured a broad terms of reference, which would have been more far-reaching than those of the Commission Prime Minister Turnbull was instructed to call by the banks.

“I think it is disgusting that the PM when he lost the numbers; George Christensen was willing crossed the floor and Joyce going down, prevented our legislation from going forward and while I think the Commissioner is doing an excellent job, there should have been representatives of the people as Commissioners.

“We wanted a peoples’ commission, we wanted others of the likes of Tim Costello, Dick Smith and Oliver Yates on the Commission – what I am terrified of is that we are not going to get out of this is any understanding of what needs to be done. There is no one coming forward to say what needs to be done to stop this from happening.

“Of course the banks will just go back to where they were before. They are under commercial pressures to compete against each other.

“These are people (the farmers) that have been on the land for generations and generations – they are not out for a big quid – they have fought a thousand elements and survived – but they can’t survive with the cards that have been dealt to them. We hope this Commission gives us the leverage we need to get a restoration of the reconstruction banks – to keep the other banks honest.

“We are now playing rugby league without a referee and the people of Australia are disgusted.”