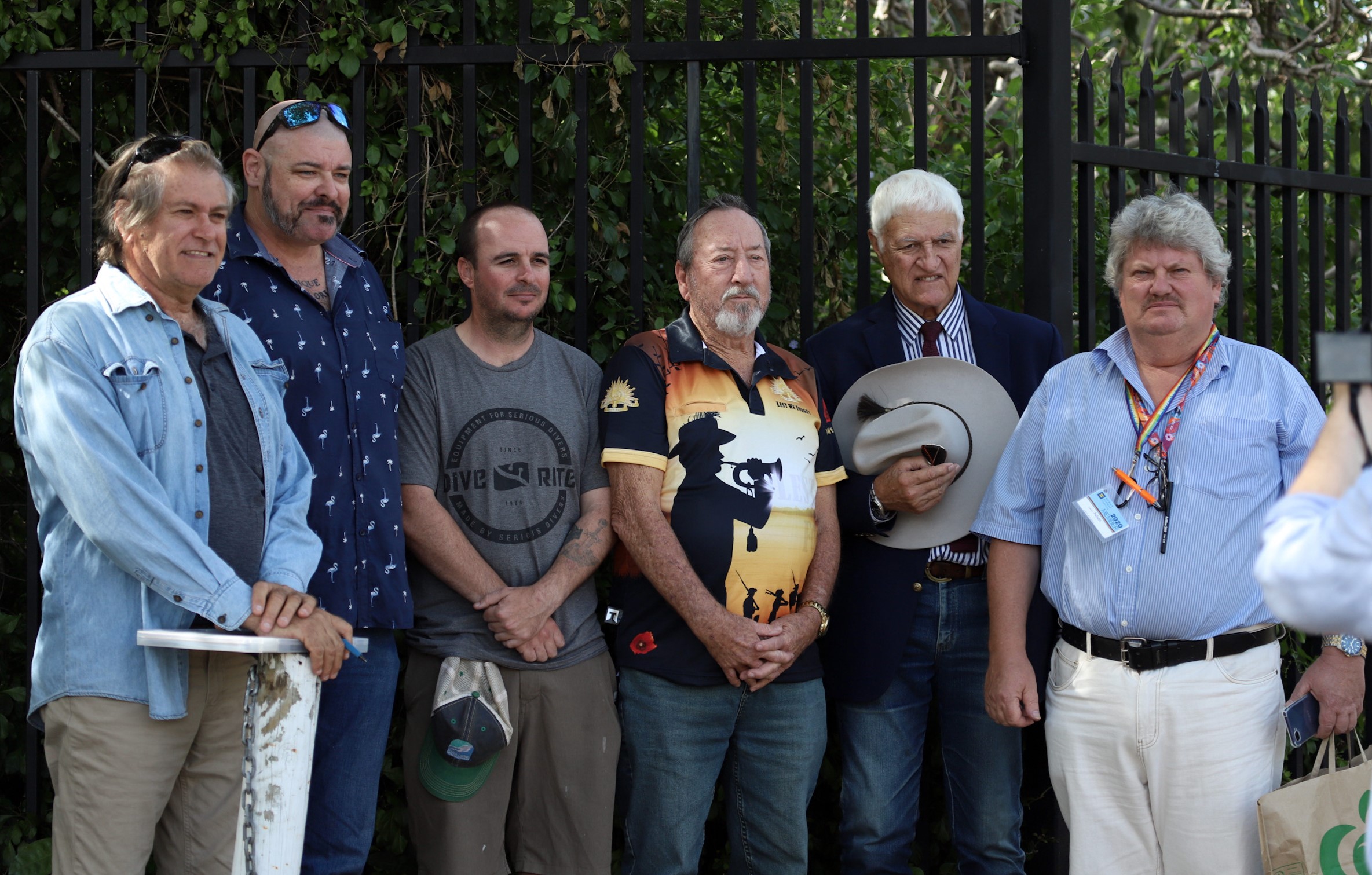 FLANKED by several war veterans, KAP Federal Member for Kennedy, Bob Katter, told media today after attending the morning session of the Royal Commission into Defence and Veteran Suicides in Townsville that he hoped that the Royal Commission will be the launchpad for reform across the Defence Force and that he would like to see a variation of the Kapani Warrior program rolled out.

The Kapani Warrior program is headed up by veteran and psychologist, Tim White, and involves a three-month military training program that helps to overcome aggression, substance abuse and trauma.

“A warrant officer once said to me that when you exit the army, you lose your identity, your purpose in life, your income, your medical coverage, and as often as not, you also lose your real family as well. Also, you can’t get a job. Your pride is all but taken away because what has kept your head upright has been removed,” Mr Katter said.

“I think that people like retired Captain Tim White, who as I understand it will be coming before the hearings, has proven that there are answers out there with his Kapani Warrior program. While he has an awesome reputation for what he has accomplished with First Australians in the Cape, to me, this is where the answers lie but on a much bigger scale.”

The Royal Commission confirmed that many more suicides had been reported to them since the last Hearing was held and Mr Katter said it was reflection of the government and their continued failure to look after the people who lay down their lives to defend Australia.

He said the Chief of Defence needs to take responsibility for his actions when he fronts the Commission on Thursday and Friday this week.

“What tipped me over the edge on this issue was when I was down at the Bushland Beach Hotel and out of a couple of hundred people, I ran into nine people whose cousin/brother/sister had attempted or succeeded in committing suicide,” Mr Katter said.

“I have religiously backed Heston Russel and Jacquie Lambie on this and helped organise the meetings in Townsville where around 2,000 people attended.

“I had been told a few months earlier that there had been 25 suicides in just 11 weeks and if this isn’t proof that the government is failing our great citizens who stand and defend our country with their lives, then I don’t know what is.

“I would have spent hundreds of hours just listening and I think it is quite clear to me now the nature of the problem, and it starts and ends with the person on the top.

“The whole Inquiry has been pushed by people such as myself who think the person in charge is a reflection upon govt and are ashamed this person is still in a position of power.

“Angus Campbell, when he fronts the Commission this week, needs to answer media reports that allege some extraordinary claims that he had said that he wants half the front-line troops to be women to raise the intelligence of the soldiers, he also needs to address the claim that he has directed the entire armed forces not to use the word ‘kill’.

“He also stripped the citations from the SAS units for allegations of atrocities which who knows if they are unfounded or not.

“If these allegations are all untrue, this is the opportunity to come forward and deny them.

“A decent commander will always take responsibility for his actions. You are the Commander in Chief. You don’t blame your troops. But all this bloke has done is blame shift at every possible opportunity.”

Local veteran, Michael Wood, said that he was pleased the Royal Commission had been held in Townsville.

“This has been a long time coming and having it in Townsville, the biggest army town in Australia. Hopefully we can help the next generation coming through, ” Mr Wood.

“We are not going to stop the suicides, but we can slow it down and we need keep that mindset. Younger people are more open to expressing their feelings, but older people like myself will hide it.

Vietnam veteran, Bob Doyle, served in the 161 Recce Flight flanked Mr Katter at the press conference and commented on his experiences.

“The Royal Commission is so important for all the wars, going right through to what we have now. This is desperately needed. I have seen a number of things, but the younger blokes have seen so much more. They’ve got a lot more behind them.

“In my car transport service business, I knew and drove around a a young bloke who had fought in Afghanistan. He’d talk to me, and I like to look after him. He committed suicide.

“I think you must look at everything here; the preparation for deployment and for what the soldier has when he comes home, that’s something we didn’t have and was desperately needed.

“Had I gotten out (of the Defence Force) when I got home from Vietnam, I might have given up. But I stayed in for another 20 years. By the time I retired, I did come out with confidence, but many don’t.

“One of the biggest problems are that Commissions take time. But something has to be decided immediately here. We are losing too many lives. They must make a decision out of this so we can all move forward.”