Bob has been the Federal Member for Kennedy since 1993, following a highly successful 18-year career in Queensland State politics where he held four Ministerial portfolios of Northern Development, Aboriginal Affairs, Heritage, and Mining, overseeing:

He could no longer support a party that had so aggressively taken up the cause of championing Paul Keating’s free market policies: policies that had had a devastating impact on his electorate and on Australia as whole.

As an independent, Bob enjoyed the freedom to vote in line with his conscience and the feelings and needs of the people of the electorate.

On June 3, 2011, Bob applied to the Australian Electoral Commission to register a new political party that embodied his core values and principles, Katter’s Australian Party.
Bob is committed to ensuring a movement exists to carry on his work well beyond his own political life, for the benefit of generations of Australians to come.

Bob continues to be a fierce advocate for the many communities he represents as the Federal Member for Kennedy.

He lives in Charters Towers with his wife, Susie. He and Susie have five adult children – four daughters and one son. They have 11 grandchildren.
Bob has electorate offices in Innisfail and Mount Isa.

Prior to his parliamentary career, the fourth-generation Queenslander prospected, developed and mined in his home of North-West Queensland. He purchased and sold cattle before owning his own cattle station in the Gulf of Carpentaria. Bob founded a successful insurance agency covering Queensland’s mid-west area, and was a Sgt Lt in the Armed Militia.

Bob has also been also a leading student, community and sporting advocate. He served as President of the Law Faculty and Student Council and the Combined Colleges Council at university. And he helped found the Mid West Rugby League and Australia’s second-biggest Country Music Festival at Charters Towers.

Bob has featured in two university texts – ‘The Way We Civilise’ by Rosalind Kidd and ‘Land Rights Queensland Style’ by Frank Brennan – and is featured in Germaine Greer’s ‘On Rage’.

Bob authored the historic manuscript ‘Ernest Henry – And Then We Went North’ while in Cabinet (1983-90).

Bob’s first book, ‘An Incredible Race of People – A Passionate History of Australia’, was published by Murdoch Books in 2012 and his second book, ‘Conversations with Katter’, was published by New Holland Publishers in early 2018.

Mount Is a Electorate Office 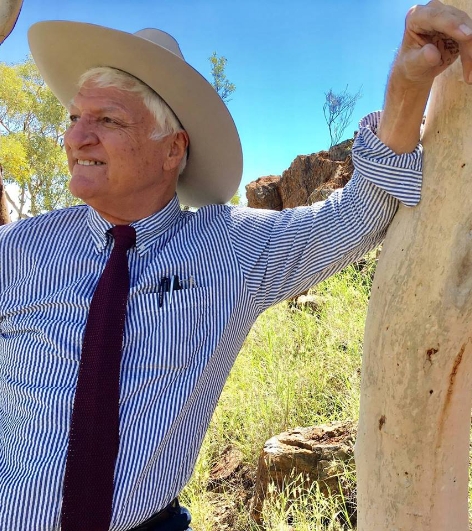