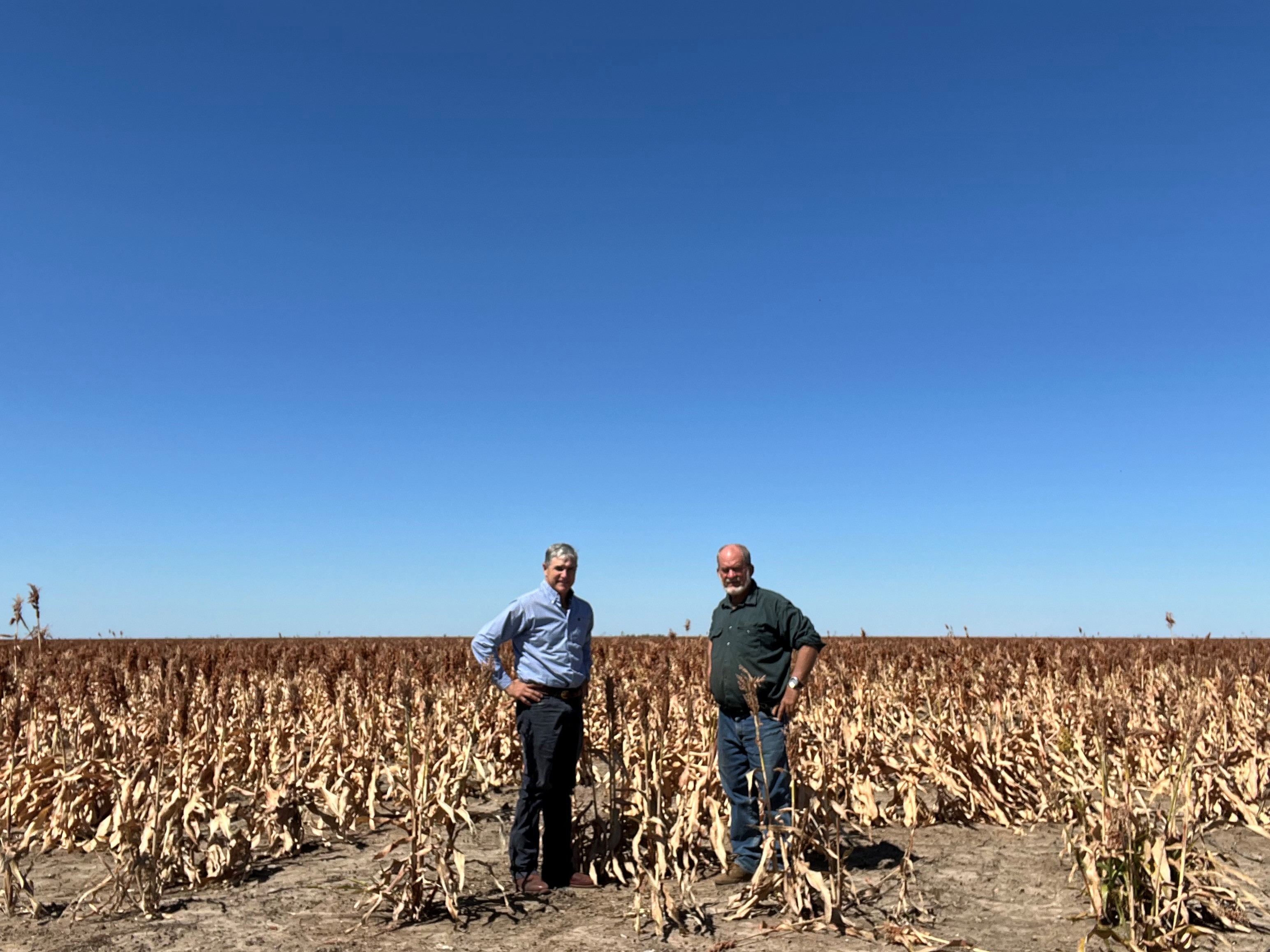 Seventy-five years after the Queensland Government declared it would grow sorghum on a remote Burketown property, a Gulf leader took it upon his own shoulders and has harvested the first crop, creating jobs and critical diversification amid grim biosecurity threats to Australia’s beef industry.

With 2,500 hectares of sorghum planted and plans to triple the area under cultivation, Cr Camp said it was imperative to explore ways to expand, diversify and value-add to the agricultural industry as Foot and Mouth (FMD) and Lumpy Skin (LSD) Disease outbreaks loomed.

“History has shown us repeatedly that no good comes from putting all the eggs in one basket … So should FMD or LSD reach this country, we don’t bring the industry and the communities and businesses that support them to their knees,” he said.

“It’s fantastic to see this (sorghum crop) – the ‘plains of promise’ – and it looks like it might be able to live up to some of that promise, looking at this crop here.”

Floraville’s harvest signalled the success of a directive first given in 1947 by then Queensland Premier Ned Hanlon that sorghum be planted at Pomeranian Holding (which is now part of Floraville) to add value to the cattle industry.

“For some reason it didn’t happen, but here we are 75 years later, finally bringing his directive to fruition,” Cr Camp said.

Floraville’s crop added to the national grain sorghum production forecast to grow a whopping 83 per cent to 2.7 million tonnes in 2021-22. Almost all the produce was destined for export to China.

Mr Katter said it was imperative that both Governments supported and facilitated diversification efforts in the agricultural industry to soften the blow from biosecurity breaches.

“We’ve been calling for urgent funding committed for a vaccination, containment and expanded surveillance programs to protect against FMD and LSD, but we need to be even smarter and more proactive in supporting our producers to adapt and survive,” he said.

Expanding drought-resistant crops like sorghum in remote parts of Queensland also created much-needed jobs as well as pathways to tap into growing demand to develop biofuels.

“This kind of farming requires an extra ten times the workforce to keep the property running, meaning bringing in more families with more job opportunities, and returning more profit to the community,” Mr Katter said.

Sorghum is a feed and forage crop for animals, as well as an increasingly popular gluten-free alternative for human consumption, and had potential to play a vital role in growing demand to develop Australia’s biofuels capacity.

In recent years, researchers at the Australian Research Council Centre of Excellence in Plant Cell Walls found the stem of a wild variety of sorghum could be used for biofuel production.

“We need a nation-wide biofuels mandate and a ban on oil exports, with that oil instead refined exclusively in Australian-owned and operated plants, and incentives for farmers and millers to invest in producing ethanol,” Mr Katter said.

The KAP was working to strengthen the ethanol mandate, as well as introduce waste-to-diesel technology, Australian-made electric vehicles for metropolitan public servants, and a ban on oil exports, under the proposed Sovereign Fuel Security Bill.